At the beginning of this month our Operations Director, Richard Mitchell, attended a 2-day Mental Health Awareness & First Aid for Mental Health course at the Livius Training Centre at Boroughbridge.

The delivery and content, as well as the input from the small group of people attending the course, was probably the most rewarding course that I have undertaken in a very long time.

Male site workers in construction are three times more likely to commit suicide than the average UK male. This shocking statistic is a vivid reminder of the difficulties faced by many working in the construction industry every day.

Whilst Mental Health concerns are well documented, and even more so during and following the last 18 months to 2 years of the Pandemic, it wasn’t something that had had a massive impact on me in my role at Moortown or indeed at a personal level. However, following a recent site visit which incorporated a disciplinary meeting with one of our site operatives I was put in a situation whereby the site operative had a breakdown in front of me.

He told me of his struggles, a long-term relationship had broken down, he was feeling isolated alone with no-one to talk to, he had taken solace in alcohol which was affecting his work life and felt things were getting on top of him and he saw no way out.  Whilst offering a sympathetic ear and suggesting he contact his GP or Health Care professional I felt at a loss as to what to say and do. 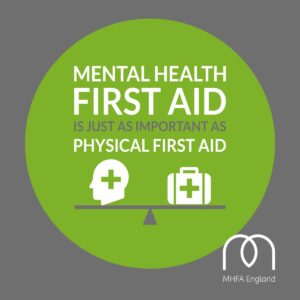 For HR and training specialists, it’s vital that decision-makers are freeing up internal budgets to address these issues. Health and Safety can often be seen as a compliance tick-box as it doesn’t always address an immediate issue. Although, in the construction sector, it is already too late if things go wrong.

I have taken many positives from the course both on a personal level as well as from a business perspective.  Our people are a prized asset, and we need to take a more proactive approach in delivering the message that it’s ok to not be ok!

Whilst it is very important to recognise and offer support and guidance for our work colleagues and being there to act as a safety net and try and catch people if they fall, it’s just as important that we try and recognise and help people before they fall. Moving forward, we’re looking to deliver some workforce engagement sessions throughout the summer with particular focus on Mental Health Awareness.

This website uses cookies to improve your experience while you navigate through the website. Out of these, the cookies that are categorized as necessary are stored on your browser as they are essential for the working of basic functionalities of the website. We also use third-party cookies that help us analyze and understand how you use this website. These cookies will be stored in your browser only with your consent. You also have the option to opt-out of these cookies. But opting out of some of these cookies may affect your browsing experience.
Necessary Always Enabled
Necessary cookies are absolutely essential for the website to function properly. These cookies ensure basic functionalities and security features of the website, anonymously.
Functional
Functional cookies help to perform certain functionalities like sharing the content of the website on social media platforms, collect feedbacks, and other third-party features.
Performance
Performance cookies are used to understand and analyze the key performance indexes of the website which helps in delivering a better user experience for the visitors.
Analytics
Analytical cookies are used to understand how visitors interact with the website. These cookies help provide information on metrics the number of visitors, bounce rate, traffic source, etc.
Advertisement
Advertisement cookies are used to provide visitors with relevant ads and marketing campaigns. These cookies track visitors across websites and collect information to provide customized ads.
Others
Other uncategorized cookies are those that are being analyzed and have not been classified into a category as yet.
SAVE & ACCEPT